As the designated representative of the UN Secretary-General in the Kingdom of Bahrain, the UN Resident Coordinator guides the UN’s engagement in development activities in the country.

The UN Resident Coordinator’s responsibilities include ensuring the coordination of the UN’s development activities, creating a platform of coordinated delivery, promoting the enhancement of national capacities and ensuring effective advocacy of UN values, standards, principles and activities on behalf of the UN with the highest level of Government.

The Resident Coordinator’s Office supports the UN country team in:

The Resident Coordinator in the Kingdom of Bahrain a.i.

Mohamed El Zarkani is the United Nations Resident Coordinator a.i and Chief of Mission of IOM in the Kingdom of Bahrain. Mohamed acquired his BA in International Relations from Webster University in the Netherlands in 2004.

From 2004-2010 he has worked with various prominent Egyptian NGOs pioneering the first incubator of social enterprises in the Middle East and North Africa. Through his work with Egyptian NGOs, Mohamed has managed multiple national and regional projects in the employment and skills enhancement sectors.

Since joining IOM in 2013, he has served as programme manager for a community stabilization initiative covering Egypt, Tunisia and Libya, and as Head of Programmes in IOM Kuwait, managing projects in areas of human development and labour mobility, as well as migrant protection and assistance.

Since joining IOM Bahrain in 2018, Mohamed has been responsible for developing and promoting the full range of IOM services according to the priorities of the Government of Bahrain. Leveraging Bahrain’s role as a Regional Centre for Excellence in combatting Trafficking in Persons, Mohamed has also established IOM technical support programmes with the Human Rights Commission in Saudi Arabia and the Ministry of Human Resources and Emiratization in UAE.

As of November 2020, Mohamed has been serving as the the UN Resident Coordinator a.i in the Kingdom of Bahrain.

Mohamed is married and has two daughters. 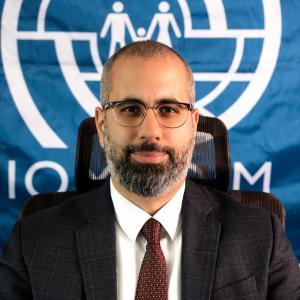