Manama, 27 April 2022 - On April 16, United Nations Secretary-General António Guterres appointed Khaled El Mekwad of Egypt as the United Nations Resident Coordinator in Bahrain, with the approval of the host government.

Mr Khaled El Mekwad has dedicated over 30 years to public service. Prior to this appointment, he served as United Nations Industrial Development Organization (UNIDO) Regional Representative for Southern Africa, covering ten SADC countries. As UNIDO Representative, he was also assigned to Sudan with coverage of Djibouti and Yemen, and Lebanon with coverage of Jordan and Syria. During his 14 years in the UN system, he worked on industrial and socio-economic development, environment, poverty reduction, human rights, and post-war recovery in the Middle East and Africa.

Prior to joining the United Nations, he had a 19-year diplomatic career. He served as Alternate Representative at the Permanent Mission of Egypt to the United Nations in Vienna, Deputy Head of Mission at the Egyptian Embassy in Dakar, and Political Officer at the Egyptian Mission to the European Union in Brussels. During this period, he was involved in bilateral and multilateral affairs, international and regional organizations, and economic and social development in Africa and the Arab regions, with emphasis on South-South and triangular cooperation.  In addition, he was a member of the national team in charge of negotiating the Euro-Med Partnership Agreement between Egypt and the European Union, where he was responsible for the chapters on Economic Development and Human Rights.

Mr Khaled El Mekwad holds two post-graduate degrees in international relations from the École Nationale d'Administration in Paris and the Institute of Diplomatic Studies at the Egyptian Ministry of Foreign Affairs in Cairo. He holds a Bachelor of Engineering degree from Cairo University. He is fluent in Arabic, English, and French. 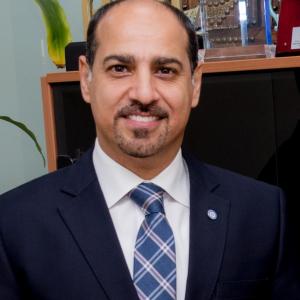